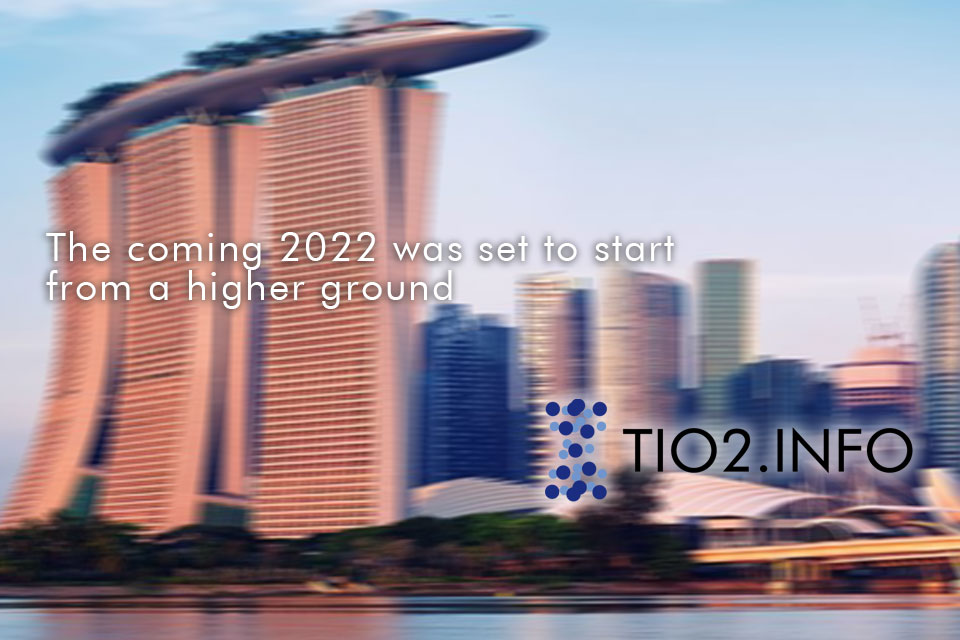 After Kronos’ announcement in 02nd Nov, on 17th Venator announced the 400USD/MT increase in asia pacific region since 1st Jan. 2022. And today, TRONOX announced the 350USD/MT increase in the same region.
At the meanwhile, the Chinese suppliers is quiet and easy. Some of them lower their price a little, but most of the suppliers kept their price still. In a whole view, the price is stable. But now, the dealers’ stock is not abundant. If the output comes into a shortage, the price will jump quickly. 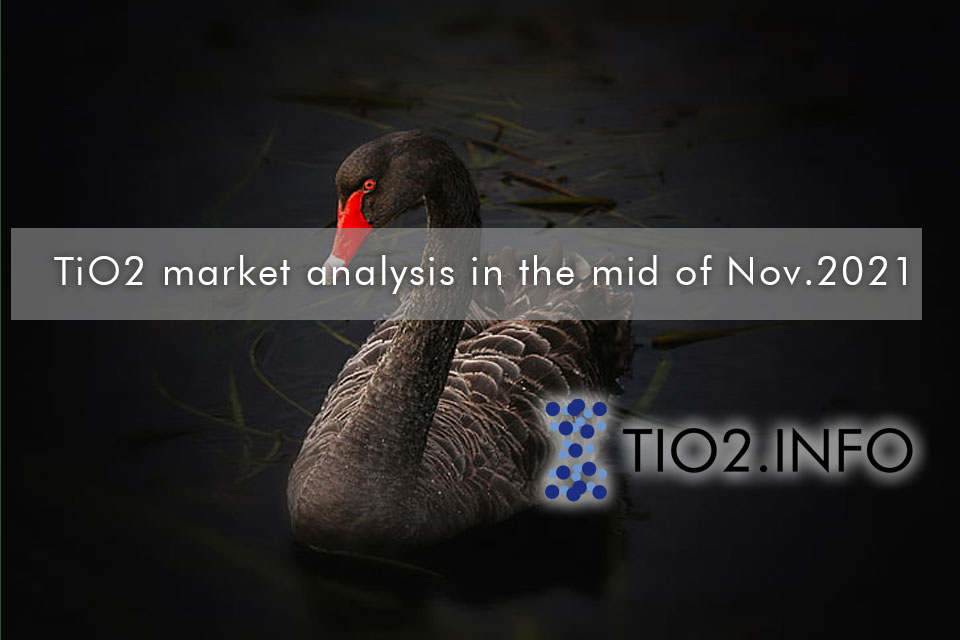 In the early of this month, KRONOS announced 400USD/MT price increase effect from 1th Jan. 2022.
Our analysist thinks it was more like a late response to earlier market increasing. With the restriction of Memorandum of Cooperation(MOC), the increasing pressure was passed to next year. But more importantly, the global shortage of chloride process tio2 is a strong pillar stone to the price increasing.

But to the Sulphate process products, it is another story. After the increasing wave in late of Oct.2021, the market is far more weaker than expected. After breaking the record time again and again, the market finally calms down a little bit. And people are waiting to the ChinaCoat2021, and expecting a drop after that. 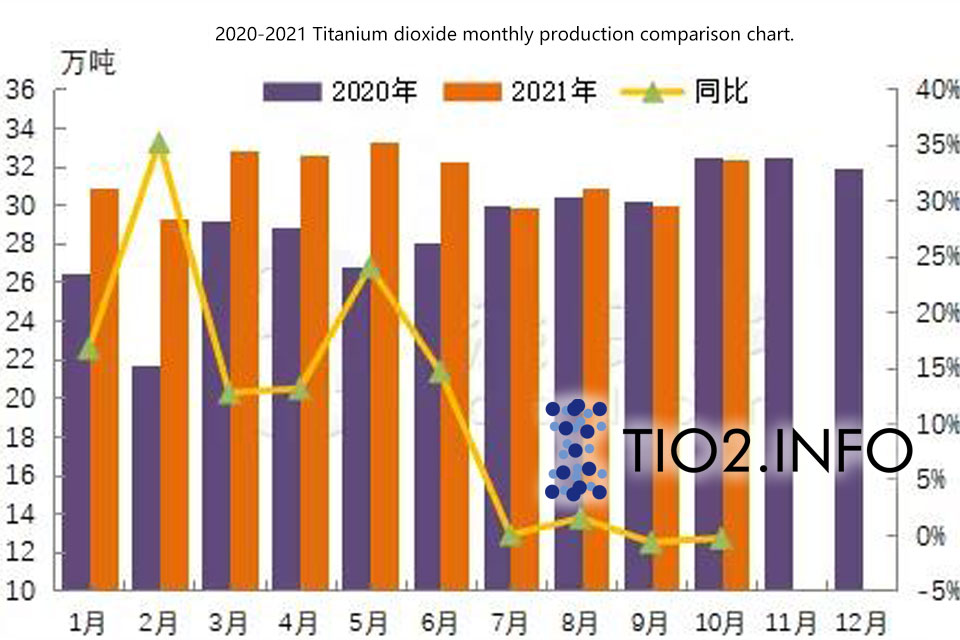 According to Toodudu.com, in October 2021, China’s titanium dioxide output was 323,800 tons, an increase of 7.90% month-on-month and a decrease of 0.34% year-on-year. The total output from January to October 2021 was about 3,143,400 tons, an increase of 10.63% year-on-year, and the output increased by about 302,100 tons from the same period last year.
The top three regions in October output were Sichuan, Shandong, and Anhui, which accounted for 22%, 15%, and 12% of the total output;
In October, due to restricted gas in Panzhihua, the output of individual manufacturers decreased slightly, but the overall impact was not significant; manufacturers in other regions resumed production, and the overall output of titanium dioxide increased in October. In early November, some large plants were overhauled, and some companies’ power curtailment was eased, but it was still affected. New production capacity was released in November. It is expected that the output of titanium dioxide in November will increase slightly compared with October. Weak, the market price of titanium dioxide will weaken steadily. 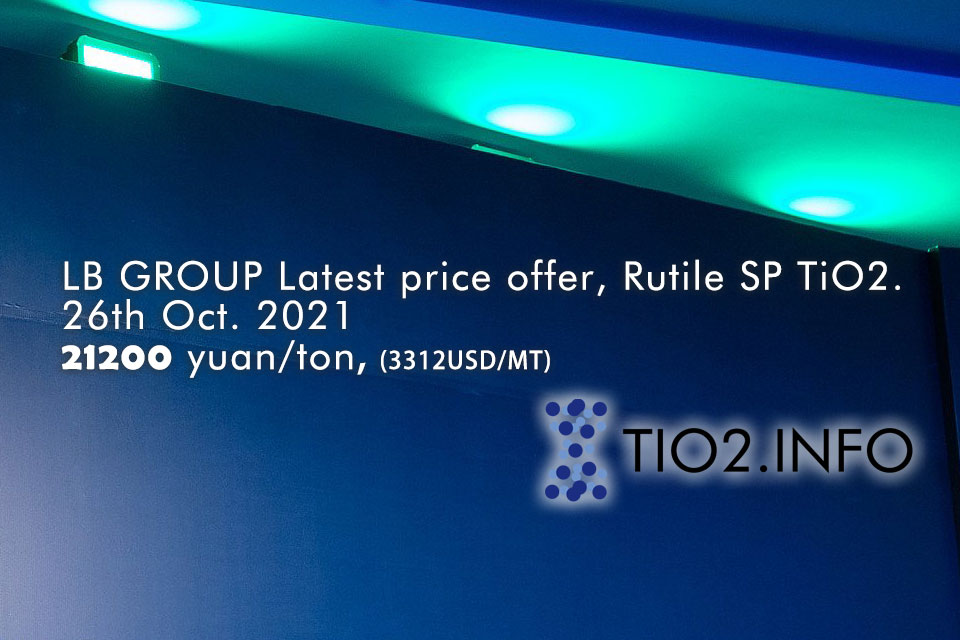 On October 26, LB GROUP, the latest quotation of sulfuric acid rutile series product titanium dioxide is 21200 yuan/ton(about 3312.5 USD/MT), and the actual order will be discussed in detail. Source: tio2.100ppi.com 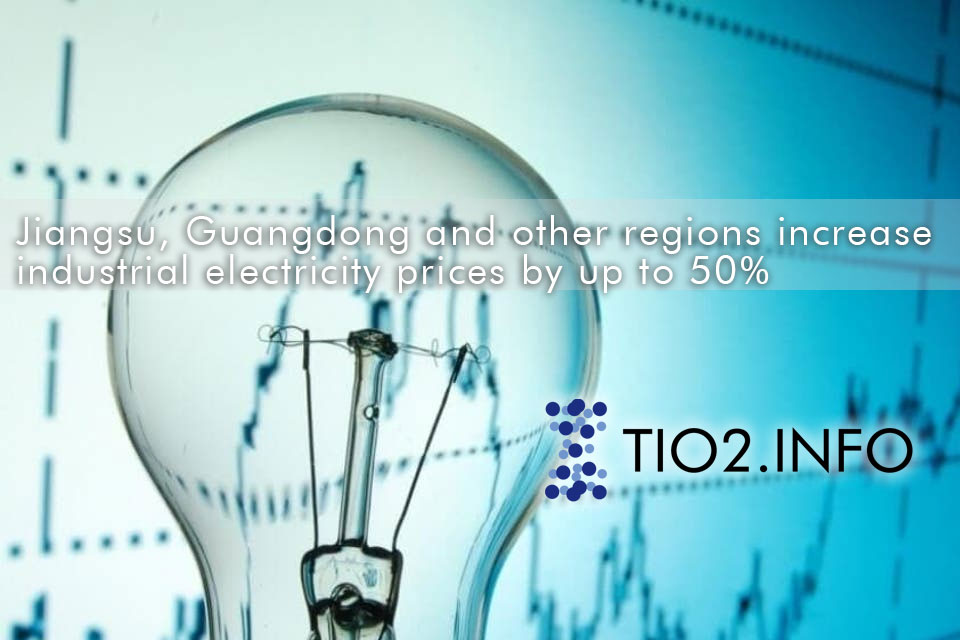 The Executive Meeting of the State Council (hereinafter referred to as the “National Standing Committee”) held on October 8 emphasized that the fluctuation range of market transaction electricity prices should be adjusted from no more than 10% and 15%, respectively, to no more than 20% in principle, and classification adjustments should be made. , For high-energy-consuming industries, prices can be formed by market transactions and are not subject to a 20% rise. 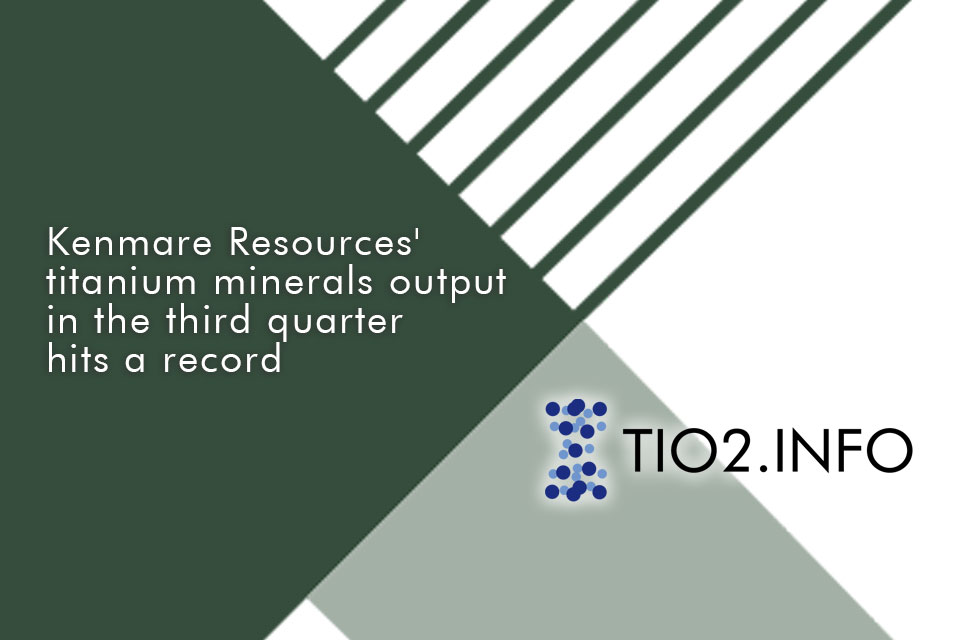 Kenmare Resources’ ilmenite production of 314,400 tonnes in Q3 2021, an 87% increase compared to Q3 2020, the first full quarter’s production at nameplate capacity of 1.2 million tonnes per annum of ilmenite, setting a new record. 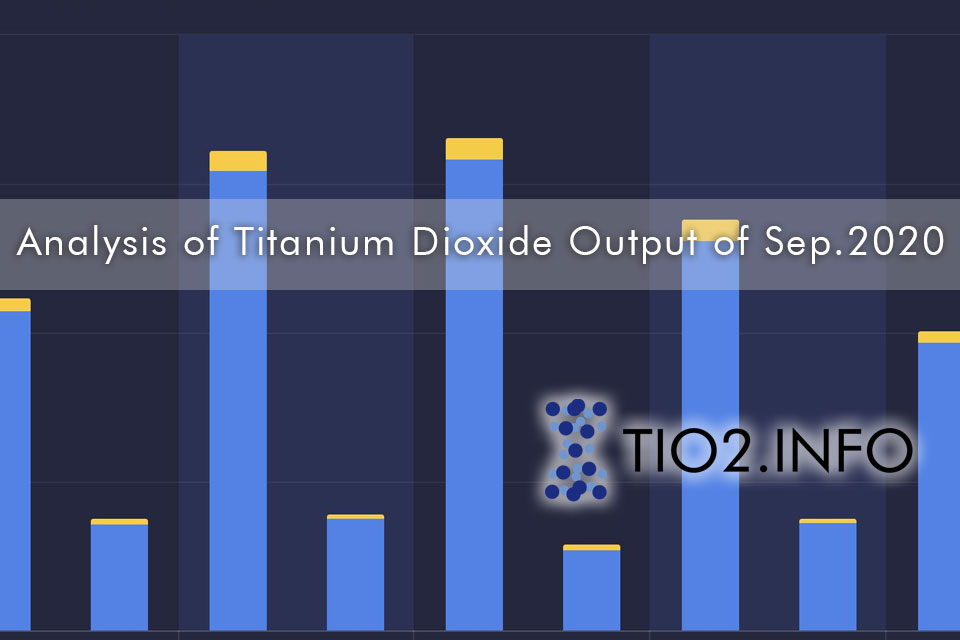 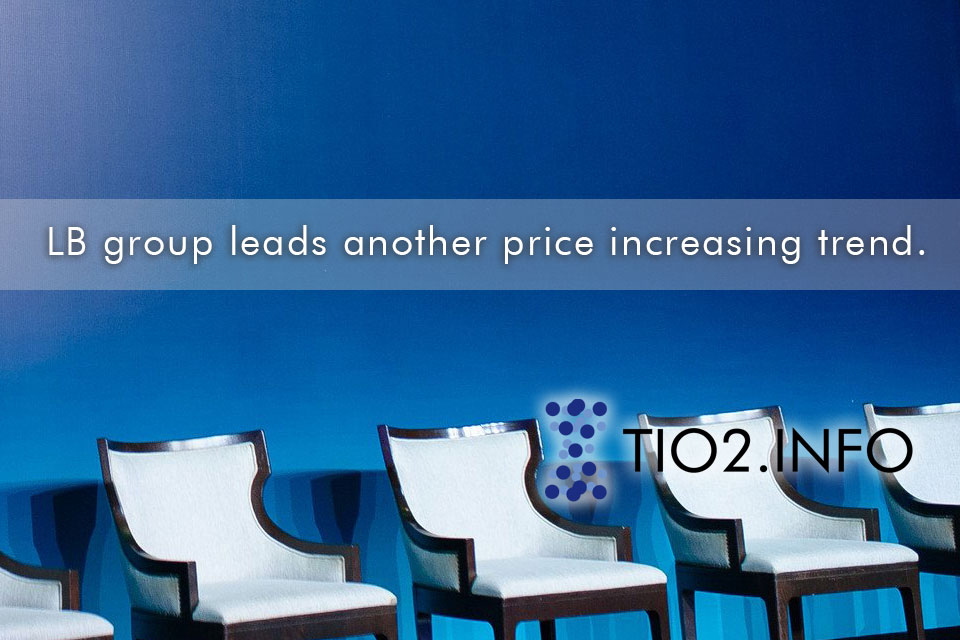 On October 11, the company issued an announcement stating that according to factors such as the market demand for sponge titanium and the increase in raw material prices, the company’s price committee decided that from now on, the company’s subsidiary Yunnan Guotitanium Metal Co., Ltd. and Gansu Detongguo Titanium Metals Co., Ltd. will increase the tax-included sales price of titanium sponge products by RMB 20,000 per ton for various customers on the basis of the original price. 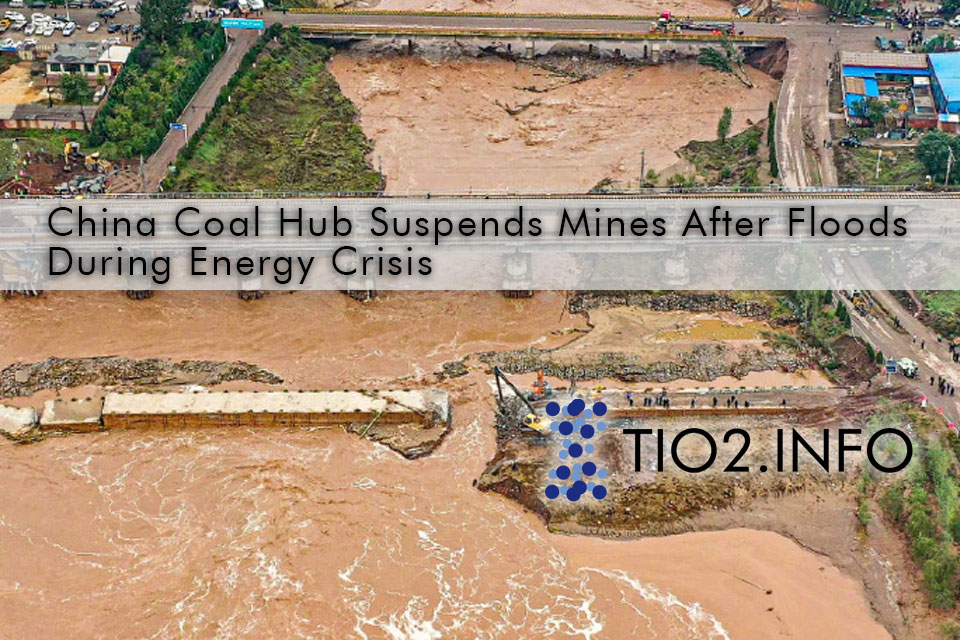 During the National Day holiday, Shanxi was hit by heavy rainfall: the largest flood peak in 40 years, the suspension of railroad tracks, the transfer of tens of thousands of people overnight, the suspension of production of 27 coal mines and 99 non-coal mines…

In the context of the current thermal coal market, which is already tight in supply and demand, more than 20 coal mines in Shanxi Province have been closed due to flood control needs, triggering concerns that the thermal coal market will have a larger gap after the holiday. 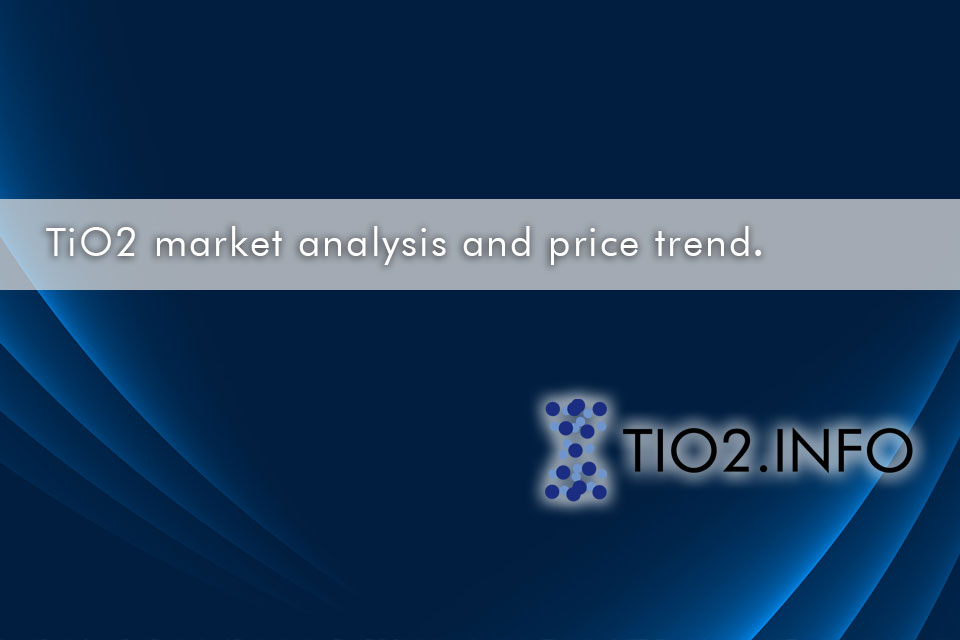 Sorry this article was not authorised for public sharing. For more detail, please contact us.