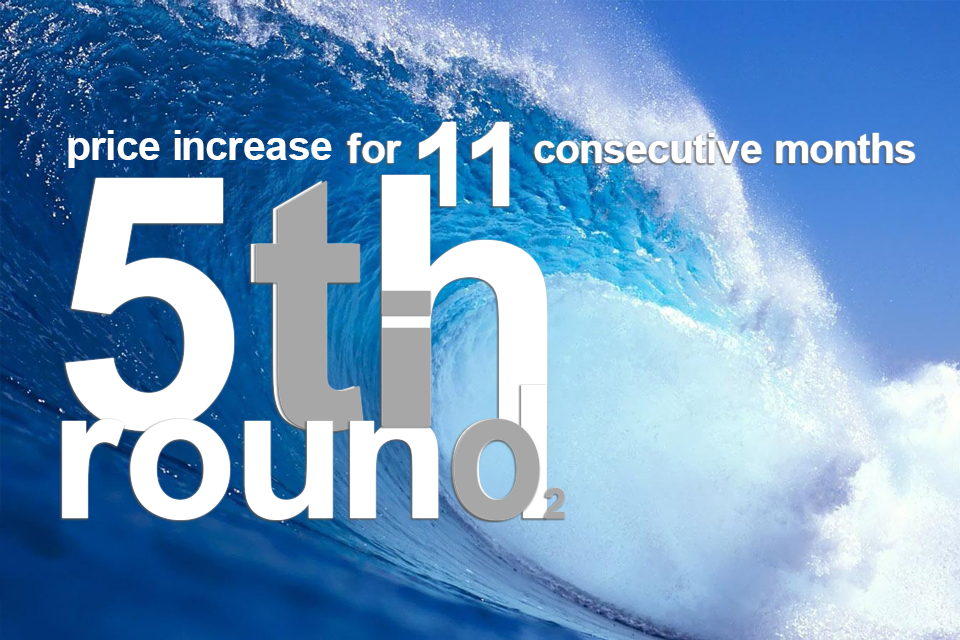 The fifth round of price increases during the year landed, titanium dioxide price rose for 11 consecutive months

As a product whose price fluctuations have attracted much attention from the market before, the announcement of titanium dioxide’s recent rise has been submerged in the “rising sound” of various commodities one after another. Inadvertently, titanium dioxide has been rising for 11 consecutive months, and the fifth round of price increases this year has also landed one after another, and the record for the longest product price increase is about to be broken.

The price hike lasted for nearly a year

Prior to this, another leading company in the industry, CNNC HUA YUAN Titanium Dioxide Co., Ltd(Known as CHTI), also issued a price adjustment announcement, stating that the overall increase in the sales price of the company’s main products will help further enhance the company’s continued profitability and improve the company’s market position and influence. It is expected to have an impact on the company’s operations. The results will have a positive impact.

The price adjustments of Lomon Baili and CNNC HUA YUAN Titanium Dioxide Co., Ltd are not alone. After the May 1st holiday, the titanium dioxide price market has remained strong and stable.

Yang Xun introduced that the mainstream prices of most domestic sulfuric acid rutile and anatase titanium dioxides currently range from 19,800 to 21,000 yuan/ton and 18,300 to 19,000 yuan/ton. Domestic and imported chlorinated rutile titanium dioxides differentiate the mainstream prices by use At 21500-23500 yuan / ton and 27000-28500 yuan / ton (the above are all tax-included cash outbound prices). Since July 2020, the titanium dioxide market has been rising for 11 consecutive months, almost equal to the longest continuous rise record of titanium dioxide in 2016. The price market continues to be strong, and the price of holders is relatively hard. For low-price inquiries More resistant, more inclined to cash orders.

Zhuochuang analyst Tian Xiaoyu also said that the current domestic titanium dioxide market has been rising for 11 months, and the market price will also break through the historical high since 2012. During the period, as the most upstream of the titanium dioxide industry chain, titanium concentrate performed more prominently. In the second half of 2020 alone, the growth rate exceeded 65%, and in some stages it provided strong cost support for the price of titanium dioxide.

What are the factors supporting the continued increase in the price of titanium dioxide? Is the price increase sustainable?

Yang Xun said that the current trading market is still very confrontational, and the price market is in a state of gaming. In terms of demand, industries such as plastic color masterbatches have entered the off-season, and overall demand has declined. At the same time, the downward transmission of costs is difficult, and it is more resistant to high-priced titanium dioxide, and production is simply stopped. In addition, high-priced titanium dioxide forces end customers to try alternatives. However, on the supply side, titanium concentrates are always tight and expensive, and the raw material cost of titanium dioxide remains high.

At present, the market has a large number of foreign trade orders, and the main manufacturers have received orders until June. The vast majority of manufacturers and distributors are tight in stock, especially some of the main brand products. What needs attention is that environmental inspections and emergencies have also caused some regional producers to suspend production, causing production capacity to shrink.

Cost support is indeed one of the main reasons why the price of titanium dioxide continues to rise.

Regarding the market outlook, Yang Xun believes that in the short term, the game between supply and demand is obvious, demand enters the off-season, and the terminal is more resistant to high-level titanium dioxide; supply-side manufacturers have high costs, smooth exports, tight spot prices, and low start-ups. Without the support of demand, the mid- to long-term market trend is still unclear, but the profit in May is as expected, and the current real order price is strong and firm.